It’s been a fantastic month at LandWorks: thanks to start-up funding from Plymouth University, support from LandWorks, and just-this-minute-confirmed Arts Council England funding (65% – 14.5k), I’ve embarked on my first major art project since graduating last year: working with current and ex-offenders to create a land art sculpture which communicates their key achievements and future aims within the project.

Just today we added the first bit of cob (a mix of clay, straw, aggregate and water, which when set has the same tensile strength as concrete!) to the dry stone wall base, coinciding with the return of a trainee who helped with my first voluntary project at LandWorks 18 months ago. 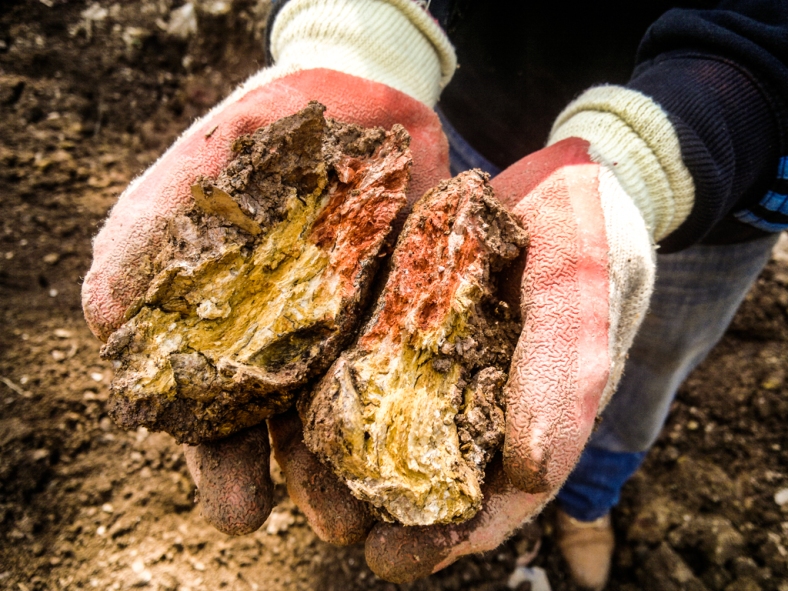 He had great ideas then (we were reminiscing today about his suggestion of using a ratchet after I struggled to tighten over 100 bolts with spanners) and still has: “I’ve got an idea Sar, why not just dump a load of cob in that wheelbarrow, and put it straight on the wall, rather than rolling all these balls?”

Good point! I was just using the technique that had been taught in very different circumstances, but here was Brian using his creative problem solving skills to save time and energy.

And there in lies part of the answer to why ‘socially engaged art’ – that is, art which is created with a community or social group – at LandWorks (and generally) makes a difference, not only does it provide a way for participants to express themselves freely in order to tackle personal and social issues, but it develops the ability to spot when things can be done differently and approach new challenges with confidence.

This growth in confidence and improvement in problem solving skills through art has been seen time and again with trainees at LandWorks: when Gary was asked if he’d like to have a go at some 3D sculpting (out of insulation blocks as it happens) his instant response was: “I don’t really do art”. Ah yes… that old chestnut. This is often the first reaction, and thinking about it – it’s hardly surprising. Art is often seen as some sort of ‘other’ – conjuring up images of exclusive, pristine white gallery spaces with mystified interpretations of work which bare little relevance to these guys lives. Yet, chisel and mallet in hand, Gary has a go at this sculpting malarkey. Two hours later and he’s transformed a nondescript square block of material into a perfectly formed hedgehog.

But the point here is not what he’s made – brilliant as it is – but the massive confidence boost written all over his face after making a thing from a thing, which he didn’t think he was capable of doing. A few days later, Gary proactively suggested we put up an art installation in the grounds, and helped to do so.

14 current and ex-offenders will help create the cob wall timeline over the next 6 months, in the process taking ownership of the work, building confidence in their abilities, developing creative thinking skills, and expanding links with the local community. 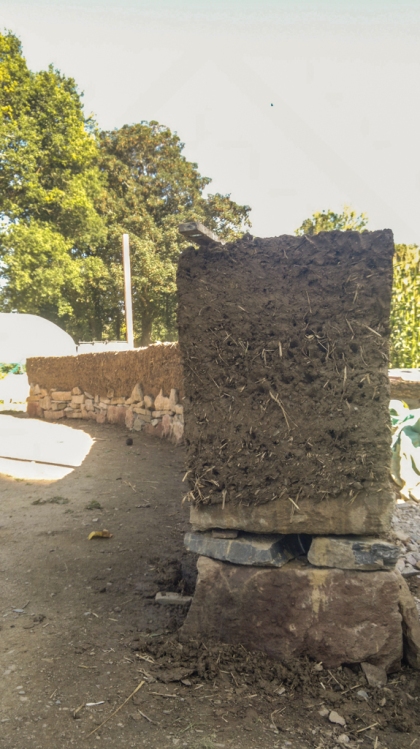 Detail of the dry-stone wall base (no cement used!) with the first layer of cob on top – the sculpture will be created using almost entirely natural materials, the only exception is the water-proof membrane on the roof 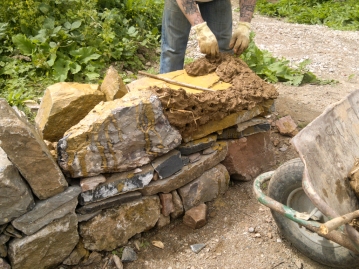 LandWorks trainee adding the first bit of cob to the sculpture